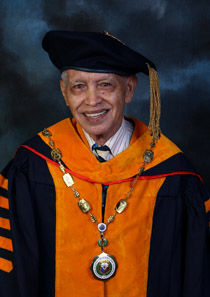 Barba, Ramon C. (+)
Ph. D. Horticulture
Agricultural Sciences
In recognition of his significant and outstanding scientific and technological contributions to Philippine Agriculture including the discovery of a very effective and practical flower induction treatment which is considered as the most significant breakthrough in mango research in the country. His technology of using potassium  nitrate to stimulate flowering is a milestone in the study of tropical tree physiology and is the main stimulus to the growth of the local mango industry.
His researches on tissue culture of bananas, sugarcane, cassava, and many other horticultural crops have resulted in the development of valuable methodologies in plant physiology and plant breeding.
His dedication, perseverance, innovativeness and positive attitude to work productively despite limited resources serve as an example especially to aspiring scientists - that one does not need highly developed facilities and good compensation to discover something significant and useful. His willingness to share his discovery to the greatest  number of beneficiaries is shown by his noble decision of not enforcing his patents so that anybody could freely use the technology. He is selflessly committed to serve the industry in disseminating the technology through lectures, seminars and production guides without material reward.
Birthdate: 31 August 1939
Died: 10 October 2021
Educational Background: