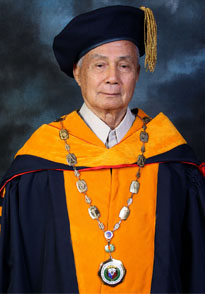 Alcala, Angel C.
Ph. D. Biological Sciences
Biological Sciences
Academician Angel C. Alcala is presently University Research Professor and Director of the Silliman University- Angelo King Center for Research and Environment Management, the CHED Zonal Center for Region 6 & 7, and the University Research and Development Center at Silliman University, Dumaguete City. Philippines. Prior to these academic positions, he served the Philippine government for nine years (1990-1999) first as Deputy Executive Director of the Philippine Council for Aquatic and Marine Research and Development under the Department of Science and Technology, then as Secretary of  Environment and Natural Resources and later as first Chairman of the Commission on Higher Education during the Ramos presidency. He was Professor of Biology at Silliman University and served as its president for two years before  taking up the last two government positions.  He is currently University Research Professor at Silliman University.
Academician Alcala obtained his BS in Biology magna cum laude from the Silliman University in 1951 and went on to finish an MA (1960) and a PhD (1966) in Biological Sciences at Stanford University, Stanford, California, USA. He received honorary doctorates from Xavier University and University of Southeastern Philippines. He has conducted  extensive research on Philippine amphibians and reptiles since the mid- 1950s. He served as consultant on marine and aquatic projects supported by the UNEP, UNDP, World Bank GEF, and the UP MSI. He also actively participated in the Australian-ASEAN marine project (mid-1980s - early 1990s). The Silliman Marine Laboratory, which he founded in 1973-74, has been active in research on marine protected areas, fisheries and marine biodiversity, mariculture, and conservation of Philippine plant and animal species. His marine science publications consist of about 80 papers on coral reef fish, marine reserves, long-term effects of protection on marine biodiversity such as corals and top predatory fish. Most of these papers have been published in refereed, international journals and books.
Birthdate: 1 March 1929
Educational Background:

Involvement in science and technology advocacies, publicity and legislation:

Involvement in science and technology advocacies, publicity and legislation:

Three most significant contributions to Philippine science and society:

Three most significant contributions to Philippine science and society: