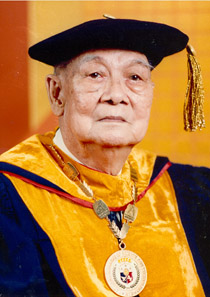 Santos, Alfredo C. (+)
Dr. Physical Chemistry
Mathematical and Physical Sciences
Dr. Santos is recognized for his researches in the chemistry of natural products. He has done a lot of work in the isolation and elucidation of the phaeantharine and other alkaloids from Philippine medical plants.
For 45 years, Dr. Santos served in various capacities at the University of the Philippines until he retired in 1965 as Dean of the College of Pharmacy. After his UP stint, Dr. Santos continued to do research at the UST Research Center and the National Institute of Science and Technology (NAST).
Birthdate: 15 August 1900
Died: 11 April 1990
Educational Background: