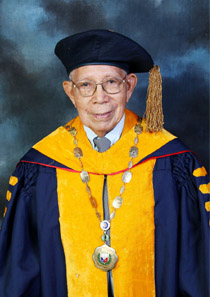 Lantican, Ricardo M.
Ph. D. Plant Breeding and Genetics
Agricultural Sciences
For his research on cytoplasmic inheritance of hypersensitivity to a disease in maize, a discovery that has created an awareness among biologists of the importance of genetic diversity as a weapon against environmental adversities.
Dr. Lantican's efforts in plant breeding, more specifically in the development of varietal resistance and the improvement of plant structure and morphology, have paved the way for the release of outstanding varieties. These varieties are now being commercially grown by farmers in the Philippines, parts of Southeast Asia, East Asia and South Asia. The new plant structure developed in mungbean through his effort and that of his team has resulted in doubling of yields. The plant types evolved in the Philippines were heavily used as parents in the breeding program of the Asian Vegetable Research and Development Center (AVRDC) in Taiwan.
Birthdate: 8 January 1933
Educational Background: