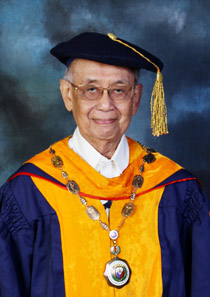 Juliano, Bienvenido O. (+)
Ph. D. Organic Chemistry
Mathematical and Physical Sciences
In the span of 32 years as a Chemist in charge of grain quality research at the International Rice Research Institute (IRRI) from 1961-1993, Dr. Juliano contributed significantly to basic knowledge in varietal differences in grain quality of table rice and rice food products and rice nutritional quality, from his researches done at IRRI and in collaborative studies with scientists in related disciplines. Furthermore, new and improved methods for quality evaluation were developed and tested. He continues his rise research as a senior consultant at the Philippine Rice Research Institute (PhilRice) Los Baños since his voluntary retirement from IRRI in June 1993.
Juliano is author or co-author of over 370 scientific papers on rice chemistry and quality and edited and contributed to several chapters of the 2nd edition of the American Association of Cereal Chemists (AACC) monograph "Rice Chemistry and Technology" in 1985, wrote "Rice Chemistry and Quality" for PhilRice in 2003, "Rice in Human Nutrition" for FAO in 1993, and compiled IRRI quality data on world rice. His IRRI laboratory trained chemists from national rice breeding programs of many countries. He was MS and PhD theses adviser to scholars, fellows and research assistants; several post doctoral fellows and visiting scientists did research in his laboratory.
A world authority on rice grain quality, Juliano has been recipient of many awards and citations, including the Ten Outstanding Young Men Award in Science in 1964, the JP Rizal Pro Patria Award for Rice Chemistry in 1976, the Japanese society of Starch Science Medal of Merit in 1982, the Thos B. Osborne Medal Award from the AACC in 1988, the National Research Council of the Philippines National Researcher Award in Physical Sciences in 1993, the ASEAN Outstanding Scientist and Technologists Award in 1998, and the Rank and Title of National Scientist conferred by the President of the Philippines in 2000. In 2004, he was included in the Institute of Scientific Information Highly Cited Researchers. He is in the Editorial Board of Journal of Cereal Science and Food Reviews International.
Birthdate: 15 August 1936
Died: February 21, 2018
Educational Background: