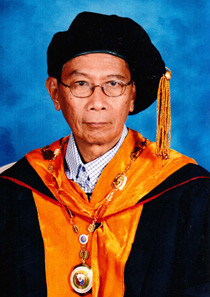 Fabella, Raul V.
Ph.D. Economics
Social Sciences
Academician Fabella obtained his undergraduate degree in Philosophy at the Seminario Mayor-Recoletos and his masters degree in Economics at the University of the Philippines Diliman. Later on, he finished his doctorate in Economics at the Yale University.
He has done pioneering works on novel analytic constructs that proved to be useful for problems in economics. Acd. Fabella introduced the subsymmetric sets which extended the reach of the celebrated Nash bargaining solution to more egalitarian (Rawlsian) grounds. He also proposed the Olson Ratio, which enriches the rent-seeking paradigm that derived and applied the Debt-Adjusted Real Exchange Rate, which enlarges the pool of relevant indicators for exchange rate policy.
Academician Fabella is a member of the National Academy of Science and Technology (NAST), Philippines since 1995 and is currently a Professor of the School of Economics at the University of the Philippines Diliman.
Birthdate: 12 April 1949
Educational Background: