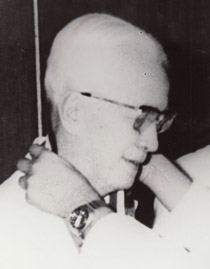 Del Rosario, Casimiro (+)
Ph. D. Physics
Mathematical and Physical Sciences
Dr. del Rosario's contributions to science are in physics, meteorology and astronomy. His work on soft x-rays which required high vacuum photography earned him recognition. He co-founded the Bartol Research Foundation in Philadelphia which undertook pioneering researches in nuclear physics.
His researches on ultraviolet light of different wavelenghts, on the effewct of radioactive radiations on euglena, on the high voltage electrical discharges in high vacuum, soft x-rays, and many others earned for himself and his country lasting honor and distinction.
For 11 years Dr. del Rosario headed the Philippine Weather Bureau and was the first Vice-Chairman of the National Science Development Board.