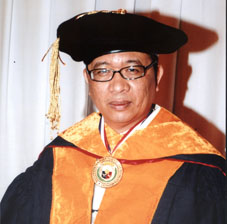 Albacea, Eliezer A.
Ph. D. Computer Science
Engineering Sciences and Technology
Academician
Acd. Albacea's discovery of the leapfrogging samplesort contributed to a large amount of savings in computing time for most data processing applications. About one quarter of all Central Processing Unit (CPU) cycles (or computer time) being consumed by all applications around the world is spent on sorting. If the sorting procedure in all these applications is replaced with Leapfrogging samplesort, the saving in CPU time used for sorting can be used for other useful purposes.His work on web-based online databases has contributed to the efficiency of many government agencies involved in data generation and data collection. With the online database in place in agencies like National Economic and Development Authority (NEDA) and Philippine Institute of Developmental Studies (PIDS), all their clients asking them for data can simply go to their computers, connect to the internet and download the data they need. The cost of traveling to different agencies producing these data by the clients has been eliminated by the system resulting in great savings to those collecting data.His work on bipartite graph drawing has led to designs of VLSI circuits which are more cost effective and less prone to heat damage.
At UPLB, a more efficient communication channel (e.g. sending memoranda) via electronic means through the efforts of Dr. Albacea using fiber optics technology has saved time, paper, manpower, etc
Acd. Albacea has taught not only the technical content of computer science, but has gone further by teaching good moral values and preparing the students for challenges they will face in the future. This was well stated in the citation of UPLB Outstanding Teacher Award for Physical Sciences awarded to Dr. Albacea.
The degree programs initiated by Acd. Albacea have become a major source of high-level manpower in computer science and information technology. The non-formal training programs in computer science he helped design have trained numerous executives, researchers and technicians and other personnel in the efficient use and adoption of this technology in their workplaces thus enabling the country to be better prepared in this information age.
Birthdate: 2 January 1961
Educational Background: