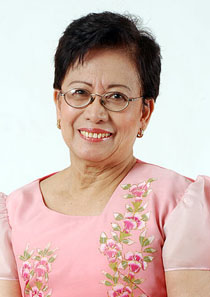 Alabastro, Estrella F.
Ph.D. Chemical Engineering
Engineering Sciences and Technology
Academician
Dr. Estrella F. Alabastro was recognized for her significant contributions as scientist, mentor, and science administrator. Dr. Alabastro pioneered in research on the thermal processing of Philippine food products to render them safe for consumption. These studies established the time-temperature protocols of the heat processing of common Filipino foods based on resistance to heat of target microorganisms. Her other studies delved on the extension of the shelf life of Philippine food delicacies and the use of irradiation as a quarantine treatment and a means to extend the shelf life of fruits such as mango. As educator, she was responsible for the institution of the Food Science Doctoral Program at the University of the Philippines Diliman and mentored many undergraduate and graduate students.
As science administrator, she championed the role of science and engineering in our country’s development. She served as project director of the Engineering and Science Education Project (ESEP) which benefited many science and engineering schools. As secretary of the Department of Science and Technology (DOST), she instituted and supported programs that had high impact on the lives of farmers and fisherfolk. Under her leadership, the DOST research institutes developed S&T-based solutions to problems frequently encountered by small and medium enterprises and set into motion measures to ensure that technologies developed by DOST agencies and academic institutions would reach the intended beneficiaries.
Birthdate: 19 February 1941
Educational Background: