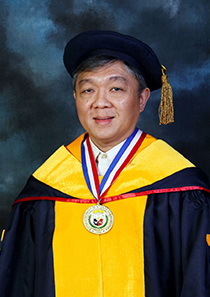 Wang, Edward H.M.
M.D. Orthopaedics
Health Sciences
Academician
Dr. Edward H.M. Wang was recognized for his significant contributions as a researcher, clinician, mentor, and scientist, specifically, for his extensive research in musculoskeletal tumor in the Philippines and for establishing that life-saving treatment and limb saving are possible in a state-subsidized government hospital for bone and tissue cancers of the limbs. His excellent collection of data of about 3000 cases on the musculoskeletal tumor patients at the Philippine General Hospital of the University of the Philippines Manila resulted in better patient service and allowed for further study and understanding of these conditions. This has served as the backbone of many research studies in terms of demographics, treatment results, and survival rates. He spearheaded the establishment of a multidisciplinary unit known as the UP-MuST Unit (University of the Philippines Musculoskeletal Tumor Unit) for optimum medical management, including medical and pediatric oncology, pathology, radiation oncology which serves as model for others to emulate locally and internationally. Dr. Wang and his team have directed their scientific work to optimizing treatment for the Filipino patient, addressing different concerns and situations unique to the Philippines.
Birthdate: 3 August 1958
Educational Background: