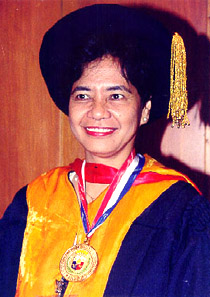 Cariño, Ledivina V. (+)
Ph.D. Sociology
Social Sciences
Academician
In recognition of her outstanding works and accomplishments in the fields of Public Administration, Political Science and Sociology which spanned a range of issues and approaches in development studies from rural to urban development, from local autonomy to national governance, from bureaucratic corruption to the imperatives of the civil service, and from participatory development models and approaches to a focus on the elite.
Birthdate: 22 April 1942
Died: 12 June 2009
Educational Background: