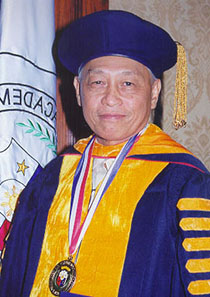 In recognition of his pioneering and significant contributions to Nematology including host-parasite relationships, national survey and identification of nematodes infesting economic crops, and their cultural and biological control which undoubtedly enriched the science of Nematology in the Philippines and earned him international recognition and the distinction of the first Filipino to be included in the "Who is Who" in Nematology.